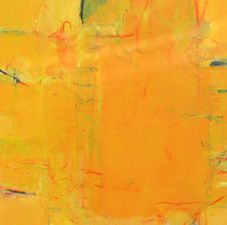 This focused group of work represents Grzyb's evolving interest in pure abstraction. The imagery is less gestural and more atmospheric suggesting a closer dialog with light and the natural world. As with much of Grzyb's work these paintings show an intense involvement with color and a beautiful Mediterranean palette is present throughout.

Zbigniew Grzyb studied at the Academy of Fine Art in Cracow, Poland, graduating with a master's degree. He left Poland for further study, and traveled through Italy, France and Turkey exhibiting his work. He emigrated to the United States in 1973 and In 1983 he had his first one-person museum show, at the New Britain Museum of Art. He was included in the Mattatuck Museum's Biennial and most recently had a show at the National Museum in Przemyl, Poland. In addition to showing his work throughout New England and New York, he is a recipient of Pollock-Krasner Foundation grant, and in 2008 received a grant from the Greater Hartford Arts Council. His work is in the collection of the New Britain Museum of American Art and the State of Connecticut Artists Collection.