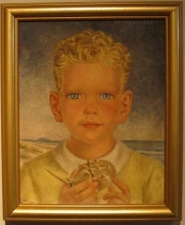 Charles Baskerville was a prominent portrait painter and muralist and could list among his subjects heads of state, captains of industry, pillars of the legal community, eminences of society and luminaries of the theater. Those who sat for him included Jawaharlal Nehru, Bernard Baruch, William S. Paley, the Duchess of Windsor, Cornelius Vanderbilt Whitney, Mr. and Mrs. Paul Mellon, Richard Rodgers, Helen Hayes and the King of Nepal. John Russell, the former chief art critic for The New York Times, said that as a muralist Mr. Baskerville "had a gift for large-scale decorations that were absolutely in tune with the taste of the time." As a portraitist, he said, Mr. Baskerville "did not flatter his sitters, but he sent them home from the studio in high good spirits." "I find that people want to be painted the way they actually look," Mr. Baskerville said. "This business about having to flatter them is nonsense." In his earlier years, Mr. Baskerville traveled to the Soviet Union and trekked by pony and foot through the Himalayas to Katmandu to paint the King of Nepal. During World War II, he was designated the official portrait painter of the Army Air Forces. As a lieutenant colonel, he traveled to the theaters of war to create more than 60 likenesses of officers and enlisted men that were exhibited widely and are on permanent exhibition at the Pentagon. Mr. Baskerville once told a friend, the writer Brendan Gill, "Of all the work I have done in my life, those portraits are what I am proudest of." His murals adorned the main lounge and ballroom of the ocean liner America, once the largest of liners; he also created murals for the Wall Street Club, for the conference room of the Joint Committee on Military Affairs of the Senate and House and for Mrs. Charles Shipman Payson and Gene Tunney. Mr. Baskerville had a dozen one-man shows in New York, and his work was exhibited at the National Gallery of Art and the Corcoran Gallery in Washington, the Metropolitan Museum of Art and the Whitney Museum of Art in New York City, the Carnegie Institute in Pittsburgh and the Chicago Art Institute. In 1925, he was recruited by Harold Ross to write and illustrate a nightclub column for The New Yorker. Mr. Baskerville used the pseudonym Top Hat. Charles Baskerville, named after his father, was born in Raleigh, N.C. He later lived in Chapel Hill, N.C., where his father was a professor of chemistry at the University of North Carolina. The family came north when the elder Baskerville founded the department of chemistry at the City University of New York. Young Charles, who intended to become an architect, interrupted his college years at Cornell to join the Rainbow Division in World War I. As a lieutenant of infantry, he won the Silver Star for gallantry in action. After the war, he returned to Cornell and began to pursue a career in art. Upon graduation, he came to New York and achieved immediate success with drawings published in the day's leading humor magazines.