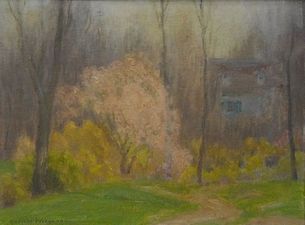 German-born Wiegand began his studies at the Royal Academy in Berlin and the Royal Academy of Dresden. When he moved to the United States in the 1890s he continued his art training with Eugen Bract and William Merritt Chase. He exhibited his landscapes and still lifes at the National Academy of Design from 1894 until 1900, and at the Pennsylvania Academy of the Fine Arts from 1900 until 1910. Wiegand won awards for his paintings, including prizes from the National Academy of Design, and the St. Louis Exposition of 1904. Like many fellow New York City artists, Wiegand spent his summers in the countryside: in Connecticut, New Hampshire, and the Adirondack region of New York, where his studio is preserved and open for public viewing. The artists associated with the Old Lyme, Connecticut art colony bestowed upon Wiegand the honor of contributing a painted panel for the dining room of the Florence Griswold House, despite the fact that he had spent only one summer there. Wiegand’s work can be found in the collections of museums such as the Butler Institute of American Art, Youngstown, OH; the Arkansas Arts Center, Little Rock, AR; the National Arts Club and Brooklyn Museum of Art, both in New York, NY.