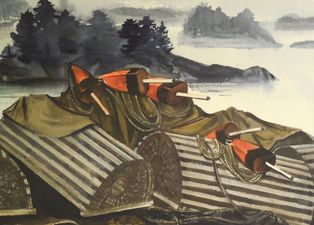 Originally from New Hampshire, Henrik Mayer took his art training at the Manchester Institute of Art in New Hampshire and the Yale School of Fine Art, from where he earned a B.F.A. Among his teachers were Maud Briggs Knowlton and mural specialist Eugene Savage. In 1931, he studied in Europe as a Winchester Fellow, and the following year he married Jessie Hull, whose birth place was New Haven and whom he met at Yale when they were both art students. He accepted a teaching position in New York City, and also served as designer and decorator of the New York Cosmopolitan Club including an octagonal room, a job in which he was assisted by his wife. In 1934 he moved with Jessie to Indianapolis where he became Assistant Director under Director, Donald Mattison, at the John Herron Art Institute. He also did fine-art painting, and exhibition venues during this period included the Hoosier Salon, Herron Institute, Art Institute of Chicago, Corcoran Gallery Biennial, and the National Academy of Design where he won the Altman Prize in 1938. To supplement his income, Mayer filled mural commissions, becoming the first painter to receive a mural commission in Indiana under the WPA's Federal Art Project. At the close of the 1946 John Herron Institute school term, the Mayers moved to Essex, Connecticut where Henrik became Director of the Hartford Art School of the Wadsworth Athaneum. Not only was this a strong professional advancement, but it was also a chance for the Mayers to return to the cultural opportunities they loved of the East Coast as well as to the vicinity of their families. Henrik Mayer continued mural work as well from his home studio, and in 1952, the couple, in their mid 40s, had a daughter, Julie. In 1956, he became Dean of the Art School of the University of Hartford in Connecticut, a position he held until 1963. He also served as Director of the Wadsworth Atheneum. Henrik Mayer died in 1972.