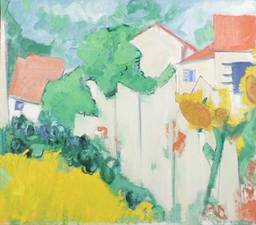 From the Gardens, Provincetown
Oil on canvas
48 x 56 inches

Ira Goldberg studied at the Art Students League of New York, in Manhattan, with Robert Beverley Hale and David A. Leffel, while working as a bookkeeper in the league’s business office. In 2001 Goldberg became the executive director of the Art Students League. “I believe the league to be the leading institution in the field of art education,” he says. “It has the distinction of operating as an atelier school based on the founding principles of self-guided and open-ended study in which students develop at their own pace as they study with professional artists. I am a product of that process and environment, and I firmly and wholeheartedly stand behind its effectiveness.”